One of the things I ask almost everyone I talk to for the first time is, “What’s the most important thing in life?” An overwhelming majority of people (around 70%) always answer that being happy is top of the list. That answer is always followed by a description of what activities they engage in as a means of finding happiness. Their list usually includes activities like travel, work, sports, hobbies, and relationships. Maybe you fit that profile; maybe you don’t. But the number one characteristic I encounter is that almost everyone is chasing after the goal of happiness.

Shirley
When I was a senior in high school – back in that other century – I set my sights on a young lady that was a couple years older than me. I was certain that dating her and capturing her affections, was everything I needed to be happy. The problem was that no matter how hard I tried, she remained just out of reach. So, I finally quit pursuing her and began focusing my attention on other things. That’s when I realized that commanding the undivided attention of another human being was never going to make my life complete.

Wouldn’t you know it? That’s the point when Shirley suddenly became interested. We never really dated but we did become good friends and I believe we each got more out of that relationship than we would have ever profited from an amorous round of psychological sparring.

Hunting
I once read an advice-to-hunters article in Field and Stream Magazine. To be honest, that particular magazine belonged to my roommate, Steve Knagg; I was way too lazy to spend time traipsing through the wilderness, in bad weather, with a heavy rifle on my back, just to score some meat which could easily be purchased at the local supermarket. I think Steve was more into fishing than hunting but the same rule applied – Safeway sold fish sticks too.

Back to the story: the guide who authored the article, pointed out that evolution has given us a far better ability to detect movement in our peripheral vision than we have in our forward vision. That’s because our long-dead ancestors didn’t have stoves with pilot lights. While they were carefully whacking two pieces of flint together to cook the evening meal, all-the-while watching that they did not catch their sandals on fire, they also needed to notice the movements of the stealthy saber-toothed tiger sneaking up on them from the side, lest they become his evening meal. We owe our very existence to peripheral vision.

Ending on a Happy Note
If anybody can be accused of being a happiness chaser, it’s me. I became a fan of positive psychology back in the early 2000’s when I read “Learned Optimism” by Martin Seligman, the granddaddy of positive psychology. Since then, I’ve read at least a dozen books on the subject, the latest of which are by writer and speaker, Shawn Achor. He devotes much of his writing to what it takes to be happy, and “chasing happiness” is far from the answer.

Apparently, there are two major contributing factors to genuine happiness and neither of them include searching for happiness. The first is developing a positive outlook. There are specific techniques for improving our odds in that area. The second and most important factor is having a purpose in life that is bigger than we are. Things like travel, hobbies, sports, and even, work, are just entertainment. They bring happiness on a temporary basis but they are easily offset by the negative issues like stress, debt, injury, and our whacked-out society.

Finding a purpose for waking up every morning is far more likely to provide us with lasting happiness. But here’s the thing, when we start chasing that purpose solely as a means to make us happy, our purpose gains a shelf-life and wears out just like every other form of entertainment. Kind of like chasing after that romantic interest or looking straight at where we think the deer might be, when we go head-on after happiness, no matter the venue, it eventually floats just beyond our grasp. But when we focus on what we were meant to be doing – whether that be career, relationships, or even mowing the lawn – and we do it in a selfless manner, happiness has a way of sneaking up behind us.

“That’s all easy,” you say, “for someone who thinks they know what their purpose in life is, but what about the rest of us?” Speaking as someone yet to discover all the answers, I’d have to say that the only thing I know for sure is that putting other people ahead of ourselves is the only true starting point for finding that purpose.

Maybe, looking for purpose is, in fact, one of the primary things we were put here to do. And seeking earnestly to accomplish that task with a positive attitude….

Want to discuss this concept. Just email me at guy@lawsoncomm.com and I’ll buy you a cup of coffee.. If you think the conversation is going to be confrontational, let’s go for something stronger – I know a couple of good bars. 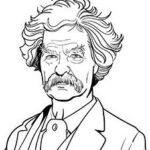 “Wrinkles should merely indicate where smiles have been” 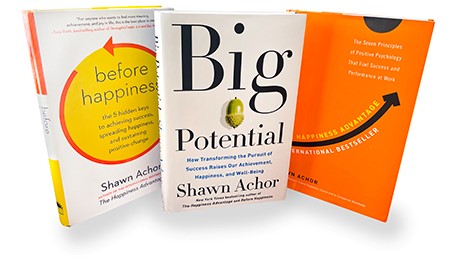 If you’ve read much of my ramblings, you know I’m a huge fan of Shawn Achor’s writing. He not only sets out some sterling principles for achieving contentment; he also provides techniques for spreading positivity within your family, office, or organization. If you go to Shawn’s website, good think.com, you can also read the first sixty pages of his wife’s upcoming book, “Broadcasting Happiness”. Spoiler Alert: At the heart of Shawn’s message is the concept of putting other people’s needs before our own. If that concept really turns you off, these books will either be a colossal waste of your time or they will revolutionize your life. I recommend you take a chance!

The Myth of Multitasking