In the summer of 1971, two days after my sixteenth birthday, I got my Texas driver’s license. Three days after my birthday, I purchased my first automobile, a 1961 VW Bus with 133,000 miles on it. It wasn’t exactly every high school boy’s dream of a hotrod chick magnet. However, I was one of those long-haired anti-establishment types, so it fit my personality perfectly.

If you know anything about Garland in the 70’s, you know it’s where the term “redneck” originated. Consequently, a skinny (yeah, I was skinny then), long-haired teenager in a VW Bus tended to go against the grain. Good old boy, Garland drivers were inclined to shoot the finger (or something more powerful) at me. One fellow, after nearly rear-ending me at a stop light, ran up to my window and told me to get my f – – – ing brake lights fixed or get off the road. The brake lights worked fine but they were nowhere near the size of the ones on his land-yacht.

Christmastime in the City
Then came Christmas and the rules of the road changed! If you weren’t a driver back in the pre-woke days before people began arguing over whether to say “Merry Christmas” or “Happy Holidays”, you probably never experienced the annual three-week cessation of automotive hostilities. It was real, and it was palpable, and it was fantastic.

Suddenly, people were slowing down to let other drivers into their lanes. They were waving for drivers at adjacent stop signs to go ahead of them. People even stopped to help other drivers change flats. It was the season of good will — right up until everyone woke up on New Year’s Day with a raging hangover and that old, inbred sense of self-servitude.

These days, before the Christmas spirit can get an initial foothold, it abdicates to the post-Thanksgiving ritual of Black Friday. Before we’ve even quit belching the cranberry sauce, retail doors fly open and rabid crowds trample each other to save twenty percent. And what happens in Walmart doesn’t stay in Walmart. The animosity and survival-of-the-rudest quickly spills out into the parking lot and onto the streets.

Why Here
Why, in one of the wealthiest cultures in history, are we willing to practically kill other human beings in order to save money on gifts we hope will express our love to a different group of human beings? Why, in bumper-to-bumper traffic, do we feel compelled to discard civility and vent our ire on the dumbass who waited too late to merge, or the irresponsible teen driver looking at their phone, or the elderly person driving five miles below the speed limit? It’s not as though you and I haven’t committed any of those acts of irresponsibility ourselves.

What If
What if we woke up one morning and said “to Hell with being competitive, being a victim, being angry? What if we determined to spend one single day of every week, intentionally being nice – not because other people deserve it but because our own souls need it, and because helping others succeed does not, in any way, diminish our own success?

In his book, “The Happiness Advantage”, Shawn Achor references a Harvard psychology study in which twenty college students were each given twenty dollars. Half of them were told to go out and spend the money on anything they wanted. The other half were told they had to spend the money on someone else. Guess which group came back more fulfilled and excited about life.

He Gets It
I have a friend named Tom. Some of you even know Tom. Every time I see Tom, he says, “What’s up handsome?” If you know me, then you’d suspect Tom is either exceedingly near-sighted or suffering from dementia. In fact, Tom greets most people that way. I’ve even seen him tell a complete stranger that “She looks absolutely astounding today” or that “He appears to be working out a lot.” What’s with that? 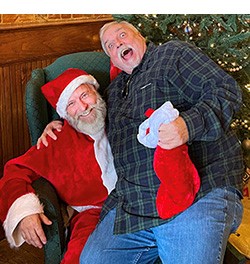 Tom even dresses up like Santa and appears at the local coffee shop every Christmas season, even though he’s skinny as a rail. Sometimes, the kids are bigger than he is and even more unruly, but Tom hangs in there. He just enjoys making other people happy. Not surprisingly, Tom smiles all the time.

Do We Get It?
Maybe if you and I started running our businesses like Tom lives his life, people would be more excited about networking with us, being our clients, being our employees, being our friends. Perhaps we would even break into a spontaneous smile once in a while just because of the way life feels. Who knows? We might even forget to honk at that goober on the freeway who doesn’t know where his turn signal is.

Drivers, Start Your Engines
Maybe we could start by treating other drivers like Black Friday is behind us and Christmas is just around the corner. A great opportunity to practice that, would be to drive somewhere and meet me for coffee so we can enjoy a more detailed discussion. You pick the place. Just email or call me and I’ll buy the coffee.

Yep, it’s another Shawn Achor book. He’s competing with Henry Cloud for “my favorite author” status and this book is every bit as good as the first two. I do recommend reading “The Happiness Advantage” first, followed by “Big Potential” and then, this book. The three books together lay a foundation for genuine smiling.

The Myth of Multitasking