A word to readers: This newsletter began as a monthly recap for my Garland Mastermind Group. As those original five group members have shared the newsletter with friends, readership has grown to roughly 60 people, mostly business owners and CEOs. If you’re receiving this, I value your input and would love for you to be a part of any conversations that arise from these short articles. Please make a habit of hitting that reply button and sharing your reactions.

And now, for something entirely different. I’m tired of doing all the talking so it’s time for you to chime in. I call this “The Dysfunctional Team” game. You have four diverse and disparate employees. Your job is to turn them into a thriving team. At the very end, there will be a place to submit your comments and ideas. If I figure out how to keep score, there will even be a prize for the best solution(s).

The Setting
Spacely Sprockets — yeah, I plagiarized that name from my favorite childhood cartoon — makes widgets and they have a logistics issue. Spacely has a contract with Angry Bob’s Trucking to pick up a load of their widgets every Friday morning. On Monday morning, new parts arrive. Between supply chain issues, lack of motivated employees, and general post-COVID malaise, Spacely often produces less than the allotment of outgoing widgets. Other times, the shipping floor is too full to ship everything at once, leaving the docks clogged when new parts arrive on Monday.

Upper management decided to create a logistics “team” to solve the problem. In keeping with contemporary thinking, they opted to make the team as diverse as possible. The trick is to figure out how to evolve that diverse group of individuals into a genuine team.

The “Team”
Buck is a 54-year-old white male who has been with the company since graduating from Ole Miss, where he was starting quarterback for two years. His hobbies are drinking beer, chasing women, and fishing. Buck has six years to go before he can retire with full benefits. Buck is an HR nightmare. On the positive side, Buck has purchased the first round of beer for most of the line workers every Friday night for the last ten years. All of the men in the factory (and a few of the women) really like him. Buck also remains close friends with several successful fraternity brothers who are now congressmen, judges, and lawyers.

Laticia is a 39-year-old single mother of two adult sons. One son is at Harvard on a full scholarship. The other is a lifetime guest of Texas Department of Corrections for an offense Laticia swears he did not commit. Laticia leaves work every day at 5:00 on the dot so she can get to her second job with a janitorial service. Harvard is not cheap, even with a scholarship, so Laticia is struggling to help her older son finance that degree. On the upside, Laticia is a great organizer and a diligent worker. On the downside, she is angry at society and her anger occasionally spews forth on those near her.

Rickee is a gender-fluid individual of Asian ancestry, who is very particular about pronouns. Rickee also happens to have an IQ of 160 and isn’t bashful about letting others in on that fact. He/She/They is less than thrilled to be working back in the office. Working from home was soooo much more conducive to multi-tasking — like playing World of Warcraft, of which Rickee is a master. Rickee feels awkwardly attracted to both Buck and Laticia.

Maria is a 24-year-old Hispanic female who got married right out of high school. She has four kids and is a very devout Catholic. Although she’s fairly accommodating, Maria is inwardly offended by both Buck’s and Rickee’s lifestyles. On a positive note, Maria went to night school and got an associate degree in business economics. She and Laticia are natural allies. On the downside, Maria often suffers from debilitating bouts of depression.

A Personal Word of Caution
Before you accuse me of promoting stereotypes, please know that I have worked with each of these individuals in real life. In fact, I’m still good friends with three of them. The names have been changed to protect the guilty but otherwise, they represent living human beings who are, honestly, not that different from the average worker. Besides, what would be the point of trying to get four affable, energetic individuals to work as a team. That’s something they would naturally do without our intervention. 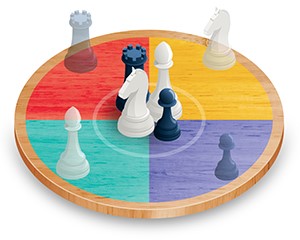 Your Mission (should you choose to accept it)
You have four players with known attributes, kind of like chess pieces. Imagine them on a Chinese Checkers board with only four wedges, each defending their own personal space. The goal is to move all four from their self-protective positions at the edge of the board to a tight grouping at the very center of the board where no individual dominates but everyone maximizes their skills to support a cohesive team and get Spacely out of the gutter. Don’t try to solve the production problem; you don’t have enough information. This game/discussion is singularly about what it would take to evolve this diverse group of people into a tight-knit, mission-dedicated team.

Challenges
What do you see as the primary roadblocks? How would you solve them in light of the two game rules? Is there an additional person that would help generate camaraderie while complementing the team’s capabilities?

Submit Your Ideas
Email me your comments via the link below. I’ll compile them and publish them anonymously next week. Please keep them short in case I get a lot of feedback. All replies are absolutely confidential. Hopefully, we can get a group together for lunch and a feisty discussion. I’m seriously interested in how each of you would approach this dilemma.

“Teams are like a porcupines, huddled together for warmth
on a cold winter night. Collaboration is not without risk.”

If I thought of today’s game as an open-book test, these are the reference books I’d bring. They’re not all business books but they’re all filled with powerful truth about human relationships, both in and out of the office. Hopefully, you’re familiar with other books on the topic. If so, I’d like to hear about them. If you’ve read any of these, I’d love to hear your thoughts.

Yeah, you’re right. This is not the replies to last
Read more

In Belligerence We Trust