We Need A Revolution

We Need A Revolution 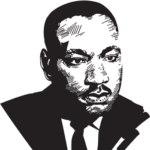 In our homes and schools and churches, we were taught that these individuals were ten feet tall, that they were almost super-human in their resolve and determination. They vanquished not only the mighty British juggernaut but they conquered the savages in the land and improvised solutions to nature’s barriers and built a prosperous, educated civilization. And in that belief, we found some sort of common bond. We proudly called ourselves “Americans”.

But the façade of exaggerated virtue could only last until some malcontent pointed out the painful truth. Once the erosion began, our innate desire to see the mighty fall saturated our view of history like a broken levee surrounding a putrid graveyard. Somewhere along the way, we ceased to celebrate our forefathers’ heroic deeds and began to lament their personal failings. The great pioneers became the oppressors of the “noble savage” (never mind that those noble savages had been killing, raping and eating each other for centuries). The inventors of everything we depend on today (steel, antibiotics, transportation, electricity) became the oppressors of the working class.

And we became jaded.

Perhaps it’s time we simply face the fact that this country, like all before it, was built by flawed individuals – men and women whose free will allowed them to be both the best of the best and the worst of the worst. But perhaps it’s time we recognized that they are neither better than us nor worse than us. We are the flawed individuals of today that future generations may well look back upon with distaste. After all, we tend to look on those outside our own religious, political and philosophical tribes with distaste and we don’t even enjoy the historical perspective of knowing how their deeds stack up.

But suppose that we opt for a new revolution, one in which we choose to burn down the status quo. Suppose that we determine to shake off the pervasive distrust that pollutes our culture. Suppose we transform our personal relationships, our workplaces, our spheres of influence into realms of acceptance — not of agreement but of acceptance — where we can engage in constructive confrontation and disagree over anything and everything without the need to win the argument or belittle our dissimilar cronies. And suppose we even begin to build businesses on those principles, where every individual is valuable, not for what they can do nor for what they believe but for who they are — flawed human beings just like you and just like me. Then again, maybe I’m just a dreamer.

STORM WARNING No, this is not a “Sky is Falling”
Read more

Can You Hear Me Now?

Can You Hear Me Now? I sometimes go to the
Read more

Rebel Without A Clue